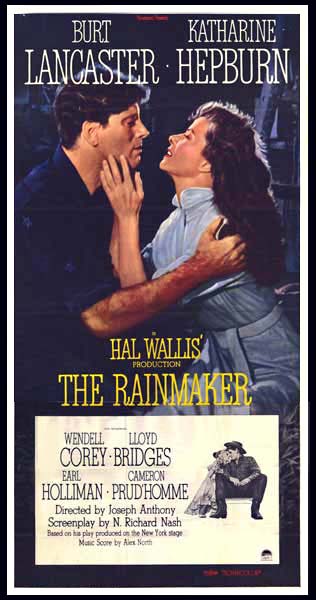 A young rookie lawyer takes on a big insurance company. There is no reason to complain that this is yet another lawyer story about a court case. There is a time to move beyond that initial reaction with John Grisham books. After all, if it works, why change?

Of the few people who do not like this book, they complain that The Rainmaker lacks any kind of action. Therefore, that makes it "boring". Well, if it has a good plot, who needs continuous action?

This novel was surprising, and it was quite good, in fact. The main character, Rudy Baylor - perhaps Grisham's most developed character. It starts off with young Rudy looking over some potential cases. Obviously not for him, at least yet, because he is just about to graduate law school and he has not taken the bar exam yet.

Out of the two cases that most interest him, the most notable one is a case against an insurance company. After he finishes school, the firm he was about to work for fires Rudy, before he even starts working. This was due to new ownership. The next firm who hires him, let him go after two days.

They just wanted the insurance company case he was working on. Well, after barely retaining the rights to the case, Rudy gives up looking for a notable firm and starts to work for his friend's lawyer, Brusier Stone.

Brusier turns out to be a real fraud. A good lawyer, mind you, but a bit illegal. Here, Rudy meets one of his associates, Deck Shiffler. Technically, he isn't a lawyer. He failed the bar exam six times in a row. In fact, Deck's character sums up the type of company Brusier is running.

Well, Brusier eventually is indicted for one of the many crimes he is involved with. Rudy is yet again left on his own, so he eventually teams up with Deck and starts a temporary firm.

That is, until they win big bucks on their insurance case - or so they think To make a long story short, Rudy takes steps to sue this insurance company who basically has killed a young boy for not funding a bone marrow transplant he needed and the great Defense Attorney, Leo F.

Drummand, meets him in court.

He is the perfect villain. It starts out with everything against him, as usual the table turns and things start to go right for Rudy and Deck This book had a first for a John Grisham novel: It was about a girl named Kelly Riker whom Rudy slowly finds himself attracted to.

She is married to a spouse-abuser. At the end of this story, that is, once the insurance company trial is over, this plot with Kelly continues on for a long while and drags along slowly.

At least, it is rather amusing in part. Rudy Baylor is the reason that this is such a good book. However, because this story was told in the first person - it was enough where you could and wanted to relate with Rudy - a true underdog.

As far as The Rainmaker goes, it isn't a killer plot, not even that suspenseful. The book starts off very good, but never really climaxed. However, it doesn't matter all that much - perhaps because the characters are easy to relate with.

Additionally, Grisham's cynical outlook in this story is pretty on the mark with the law profession of our society. If you add up all of the elements, it seems the book is solid - nothing more. But it has that extra something that makes The Rainmaker a Grisham classic that is worth your time!Putuparri And The Rainmakers review: A story of life, time and culture Nicole Ma's documentary is political and personal, serious and light-hearted, and never less than striking to look at.

Review: 'Rainmaker' cast outshines lackluster plot December 10, Web posted at: p.m. EST ( GMT) From Reviewer Paul Tatara (CNN) -- I have to be honest. If there were never another. Rudy Baylor is a jobless young attorney. However, he is also the only hope of an elderly couple whose insurance company will not pay for an operation that could save their son's life.

In this judicial. Review of The Rainmaker by John Grisham. November 10, Advicesbooks has chosen to review The Rainmaker The story is so touching that Francis Ford Coppola made a successful movie in The cover of The Rainmaker relates to last edition of .

The only thing sadder than seeing the director of Apocalypse Now and the Godfather trilogy hire on to film a legal best seller that includes the author's name in the title is seeing that John. RainMaker Films is a production and film finance company. The company, founded in by industry veterans Clay Pecorin, Russell Geyser, Rachel Winter and Chris Robert, has collaborated with some of the highest grossing actors of all time as well as top talent agencies and studios.

Putuparri and the Rainmakers is a stunning story of Aboriginal culture, life and law